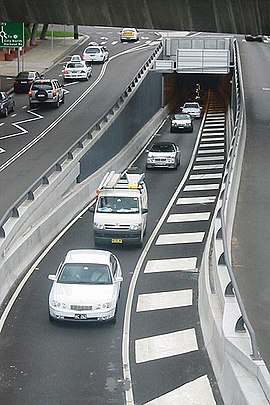 The Cross City Tunnel today
The Cross City Tunnel is a 2.1-kilometre long twin-road tunnel tollway located in Sydney. The tunnel links Darling Harbour on the western fringe of the central business district to Rushcutters Bay in the Eastern Suburbs. Each of the twin tunnels has a different alignment, with the westbound tunnel running underneath William Street and Park Streets and the eastbound tunnel running underneath Bathurst Street. The tunnel is owned by the NSW Government and is operated by Transurban, who are licensed to operate the roadway until 2035. (Source)

The reality behind the glossy image of the Cross City Tunnel 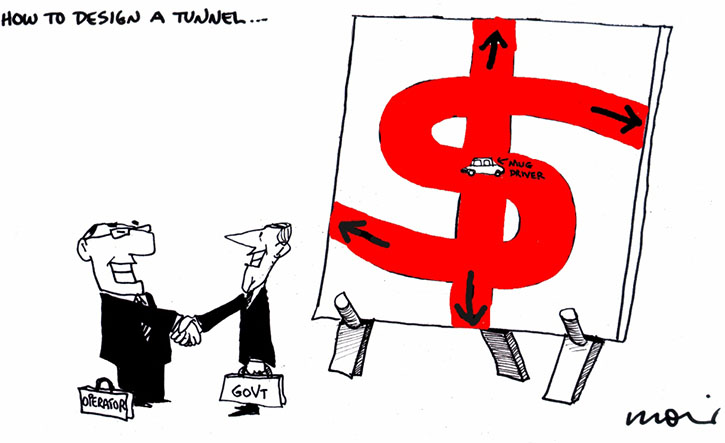 In the early 2000s New South Wales politicians, businessmen and public servants secretly carved up the inner-city road network in a calculated bid to force drivers into a private toll tunnel. They wanted to sell off public roads and restrict public transport.

In late 2002 a monopoly over inner-city roads was secretly handed to a private corporation. The Carr Labor government approved a contract for the Cross City Tunnel based on rubbery figures and featuring over seventy-two street closures and modifications and over-priced tolls.

Three years later, ordinary people finally realised the full extent of the sell-off of public roads to a private monopoly and fought back in a major campaign against the Cross City Tunnel.

The contract fiasco flushed out grave concerns about the way toll road businesses operated and sparked a debate about the benefits of privatisation. The shift to a user-pay private toll network has profoundly changed Sydney. It has led to a new focus on public interest and planning.

The Campaign against the Cross City Tunnel 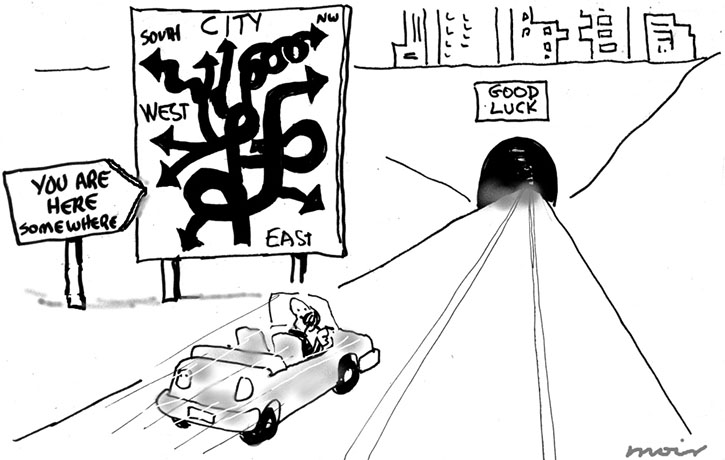 It was supported by the 2011 Residents Association and by the citizens at large, Suzanne O’Connor and Malcolm Duncan, who had been members of a limited ‘consultation group’ for the intersection at Cowper Wharf Road in Woolloomooloo.

A Parliamentary Inquiry was held in 2006 to force the release of secret documents: First Report CCT Inquiry.

Residents Win Limited Re-openings
Local residents claimed victory after the reversal of one of Sydney’s most controversial road closures associated with the Cross City Tunnel. Near the tunnel, the barriers were lifted at the corner of Bourke and William Street, allowing vehicles to turn left in and out of Bourke Street. Reopening the intersection, NSW Roads Minister Eric Roozendaal said it was a triumph for the local community. He said 12 more road changes would follow in the next two to three months. “These road changes are about improving traffic flow and access across the CBD and to the harbour crossings,” he said. Action City East spokeswoman Jo Holder said. “We need full public consultation. These are public roads that our parents and grandparents have paid for and it’s time they were given back.”

Our Criticisms of the Cross City Tunnel 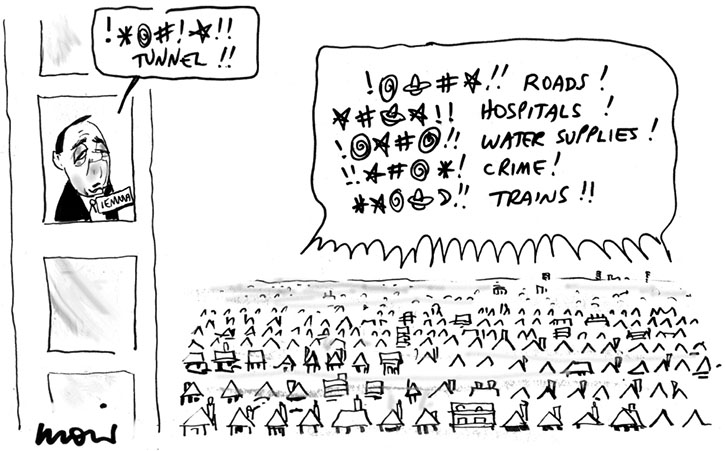 Disruption to traffic in the CBD not using the tunnel: The CCT attracted significant media attention, as many of the diversions put in place on the streets above caused increased traffic congestion and motorist confusion. Some resentment regarding surface road changes was expressed in the media. The disruption that generated the most complaints was the reduction of William Street to one general lane, and one bus lane in each direction, that exacerbated traffic flow. The bus lanes were converted to T2 transit lanes. On 6 December 2005 the head of the CCT said under oath that the company would not seek compensation if some of the controversial road changes were undone;[16] but on 7 December that decision was reversed.

Undisclosed contract conditions: It is generally thought that the NSW Government agreed to the lane reductions in William Street as part of the negotiations for the CCT contract. However, the government repeatedly refused to publicly table the contract, much to the dismay of the media and the NSW Auditor-General. A summary of the CCT contract was released, that contained details of additional possible road disruptions, with resultant increased traffic congestion for motorists not using the CCT. It was also revealed that 50 cents of the toll price is due to a $105 million payment that the operators had to make to the NSW Government for permission to build the tunnel. In late October 2005 after ongoing criticism, some contract terms were released to the public, but the government refused to release 3,000 pages of material. A few days after this, the head of the Roads and Traffic Authority was dismissed for failing to disclose an amendment to the contract, which allowed the toll to be increased by 15 cents.[20] In November 2005, the ICAC was asked to investigate allegations that sensitive Cabinet documents were leaked to the CCT operator during negotiations.[21] The ICAC found that the allegation was unsubstantiated.

Misleading signage: There were complaints in the media after the opening of the CCT about deceptive signage indicating the tunnel was the only route from Sydney eastern suburbs to cross Sydney Harbour (in particular, via the Sydney Harbour Tunnel). In response, the NRMA motoring group published a route outlining how to reach the harbour crossings while avoiding the CCT.

Price of the toll: The initial price of the toll for a one-way trip was $4.32 with an E-tag, $6.75 without an E-tag (westbound and eastbound), $1.87 with a tag when exiting on Sir John Young Crescent/Eastern Distributor, and $5.35 without. Some[who?] would say this is a high price for a short 2.1 km (1.3 mi) journey when a slightly slower but free alternative is available. Joe Tripodi, at the time Minister for Roads, pressured the CCT operators to reduce the toll, but admitted he cannot force them to do this. The CCT operators had previously ruled out a toll reduction.[24] Additionally, the price of the toll is automatically increased by the CPI each quarter, whereas other tolls are usually increased less frequently, but in neat increments of 50 cents.

No cash payment, and higher price for drivers without an E-Tag: The CCT was the first cashless motorway in Sydney. Drivers who did not have an E-Tag and who used the tunnel had to phone the CCT operators or go the CCT website after their journey, and pay the toll, plus an additional $2.50 administration fee. Those who didn’t do this received two warning letters, then a $130 fine. All other tolled roads/bridges in Sydney have subsequently adopted this model of operation.

Concerns about exhaust fumes from the tunnel: After opening, the CCT proved to be quite poorly ventilated for the expected number of vehicles, and even for the much lower number of vehicles actually using it. Currently air is released from the CCT via the single 65-metre-high ventilation stack located between the existing Western Distributor viaducts above the eastern side of Darling Harbour. There is general unease in Sydney about exhaust stacks from any motorway, after reports in the media about people living near motorway exhaust stacks experiencing health problems. However, since the opening of the CCT there was almost no discussion of this topic, with most of the focus directed towards the issues listed above, together with general concerns regarding Public Private Partnerships (or PPPs). 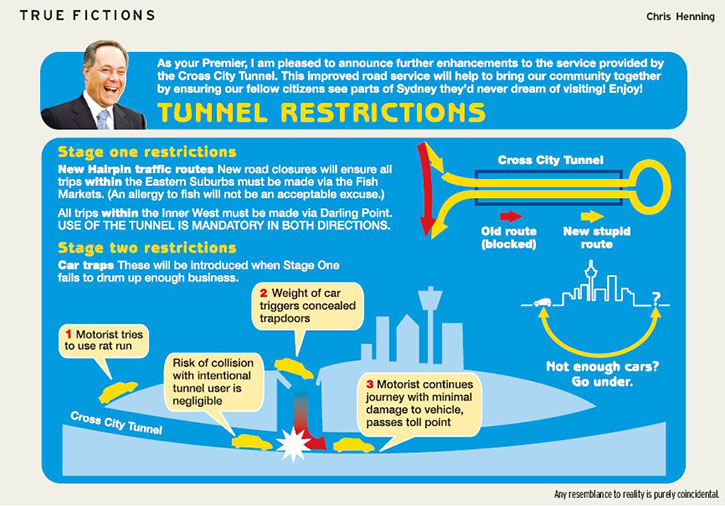 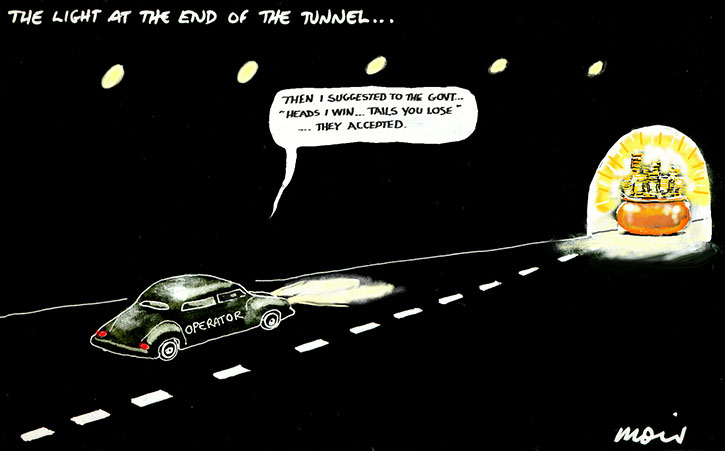